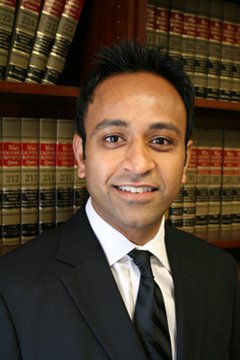 University of California, Hastings College of the Law.

Ashwin V. Ladva, Esq. has been practicing law in the San Francisco Bay Area since 1999. Mr. Ladva graduated from University of California, Hastings. While at Hastings he was a member of the Women’s Law Journal, an organization committed to reporting on social issues and offered minority and women’s groups a voice in the legal community. Mr. Ladva gained invaluable experience while at Hastings by clerking for Honorable Judge Bea of the San Francisco Superior Court. After passing the California Bar Exam, Mr. Ladva practiced law in San Jose working for a mid-sized law firm where he immediately proved his skills and was given responsibility for arguing a host of different issues in both Federal and Superior Courts. After refining his skills, Mr. Ladva opened his first office in San Francisco representing individuals against insurance companies, corporations and governmental agencies. Mr. Ladva gained a great reputation in the legal community for being a fighter who never quits for deserving clients. This reputation has benefited his clients greatly and afforded them great compensation against insurance companies, corporations and governmental agencies. Furthermore, because Mr. Ladva has proven to the defense firms that he is not afraid to take cases to trial, he is usually able to settle cases quicker than most other plaintiff firms.

In just two years after having opened his first office Mr. Ladva was proud to open his second office in Fremont. Mr. Ladva is dedicated to his clients and will fight each case with as much vigor as he does his million dollar cases.

Mr. Ladva is a member and a financial contributor to the California Consumer Attorneys Association, American Trial Lawyers Association, and the San Francisco Bar Association. These organizations are committed to keeping our courtrooms accessible and open for all of us. Please visit their websites to learn more about the great work that they do.

We specialize in personal injury, Uber/Lyft accidents and wrongful termination.

Read more about the years of invaluable experience our compassionate attorneys have.

We’re ready to fight for maximum compensation for our clients. Call for a free consultation today.

See What Sets Us Apart From Other Firms